The Ibis is distinctive for its curved bill. An ibis is almost entirely white, save for its black-tipped wings which may be seen during flight, and brilliant reddish pink legs and bill. The bare skin around its blue eyes is also reddish pink. The immature white ibis has a patchwork of white and brown feathers. Baby ibises are born with straight bills and those bills don’t start to curve downward until they are 14 days old.

Ibis are one of the most numerous and common of the wading birds in Florida. They are highly sociable and roost and feed in flocks, nesting in large colonies. You may see groups wading along the shore or around our lagoon probing for food with their long bills. They are a common sight at Pointe Santo.

White Ibises nest in colonies in trees and shrubs along the water's edge, changing locations nearly every year. Male White Ibises are super protective. They guard the nest and their female to prevent other ibises from stealing sticks from the nest and from advances of other males during nest building and egg laying.

Ancient Egyptians depicted the ibis in many wall murals and sculptures. They have also been found as mummified specimens at many burial sites and played a significant religious role. The Egyptians believed their god, Thoth visited earth upon occasion and assumed the form of an Ibis. Thoth was the god of wisdom, knowledge and writing. 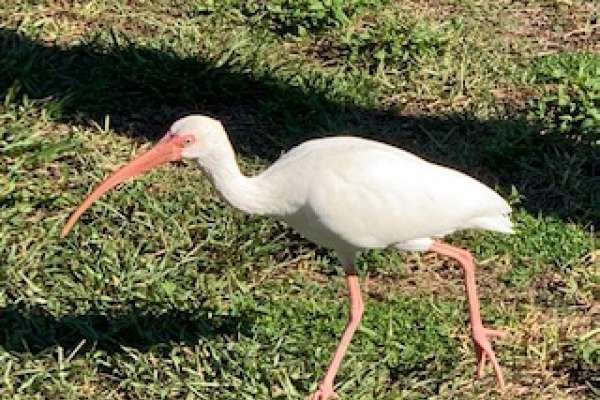